Composed by two main parallel docks, the port of Riccione is one among the most popular and appreciated destinations among yachtsmen and holiday-makers visiting Emilia Romagna.

The origins of the port are closely linked to the generosity of the American Maria Boorman Ceccarini, who, in 1897, invested her money to build a small port at the mouth of Rio Melo to serve as a shelter for fishing boats. Few years later, in 1901, the same wife of Dr. Giovanni Ceccarini build the namesake and famous road, entry point to the city from the sea.

The development of tourism became an important factor for the birth and growth of recreational boating activities. The first marina consisted of just two small jetties which soon revealed to be insufficient and unsafe both for small fishing boats and recreational ones.

So, in 1923, the construction of a new cement dock started. But only 10 years later, under Mussolini, some considerable works of dredging were carried out. In the following years, some improvements were added but without solving the main problem of the port: the low depth of bottoms and an obstruction at the mouth of the river which made the port difficult to reach for a long time.

Meanwhile, a wide dry dock on the left of the channel was built and it was the first work achieved in the region to ease the development of recreational boating.

Today, the port of Riccione is one among the "hottest" destinations of the whole Adriatic Coast. The entrance is composed by two docks oriented to North-East and the structure can receive 500 boats up to 12 m. The dry dock is well-equipped and close to the city centre, rich of fish restaurants, exclusive shops and with a relaxing promenade.

Riccione is the real protagonist and the heartbeat of Italian holidays, able to welcome any kind of tourist with its music, sport, excellent food and artistic attractions, such as the Territory Museum and Agolanti Castle. 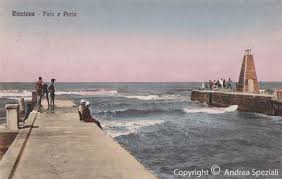 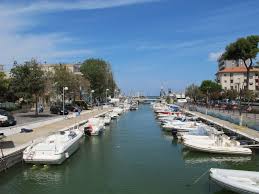