A natural shelter plunged amongst history, culture and nature, the marina of Agropoli represents an excellent landing port for anyone desiring to live and explore the pure places of Cilento Park and an important reference point for the commercial and tourist development of the local territory. For those who sail along the Tyrrhennian Coast, once passed the ancient remains of Paestum, Agropoli can be considered as the "door of Cilento", beyond which the sailor discovers a world where history, culture, traditions and natural beauties mix together. The origins of its name prove its Greek tradition: Agropoli, in fact, means "upper city". The territory of Agropoli has been visited from the Stone Age by groups of hunters and fishermen. At the mouth of river Testene, there was once a bay, used by Greeks for their commercial exchanges, both before and after the foundation of the near Poseidonia (the old Paestum). In the Roman era, starting from the first century BC, there was a small coastal village called Hercula, near the current St.Mark's promenade, used as a small landing port for the near Paestum, whose main harbour was starting to be buried under sand.

In the past, it was a small natural bay, characterized by the presence of a safe shelter and a little fortress. In the 60's, the marina became the object of a deep constant process of improvement and development. Today, it is a safe port close to the historic centre and the popular shopping promenades, in the western zone of the namesake city.

Today, the port of Agropoli is considered the real harbour of Cilento, entirely artificial and obtained from a natural cove raising out of Punta del Fortino. It consists of a 572-metre outer dock, a 327-metre quay and a 159.43-metre-long inner dock.

The entrance of the port is 145 metres large and its additional basin has a diametre of 165 m. Sea bottoms have a depth ranging from 6 to 5 m. The whole surface of the port is 31,051 square metres.

The port is surrounded by a rich green vegetation and the charming atmosphere of this ancient coastal village.

The marina is still under an interesting process of upgrading and development which aims to make the structure one among the most advanced ones in the Mediterranean. 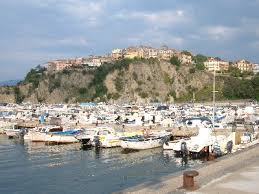